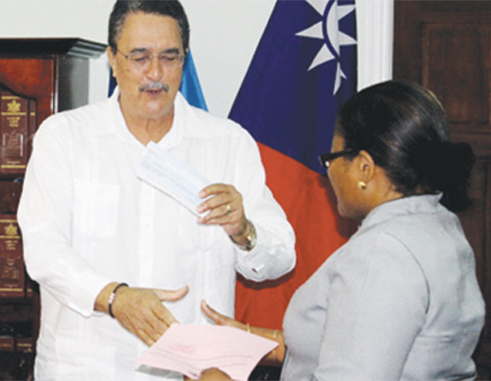 The money will be used to fund four cooperation programmes: (1) the Constituency Development Programme (CDP) for concrete roads, drainage, and soil retaining walls, (2) procurement of radiological equipment for St. Jude Hospital, (3) reconstruction of the surgical wing at St. Jude Hospital, and (4) to strengthen government’s sustainable energy initiative by increasing the use of solar and bio-energy sources, thereby reducing its spending of fossil fuels.

The lion’s share of the sum — $5.9 million – is earmarked for the completion of the 2014/15 CDP programme. It was the final tranche of the $18 million committed to that programme period by the Taiwanese government.

Just over $1 million will be spent to purchase radiological equipment for St. Jude Hospital.

A further $1.6 million will be spent on the Ministry of Sustainable Development, Science and Technology’s ongoing sustainable energy initiative. That programme, Dr. Anthony said, began during the 2013/14 financial year, is spread across three years and totals $6.7 million. Yesterday’s contribution to that programme represented the second disbursement to the project, totalling $2.4 million given so far.

“The project hopes to ramp up on its deliverables in the coming months with the commencement of a number of a retro-fitting projects and solar electric generating systems aimed at reducing government’s energy bill,” the Prime Minister said of the sustainable energy initiative.

Dr. Anthony described as important the benefits of the CDP, adding that both the infrastructure and employment aspects of such a programme make it worthwhile. He also expressed thanks to the government of Taiwan, stating that the funding received from that country will benefit government’s rollout of its programmes in light of its tight fiscal situation.

“Firstly, it provides infrastructure at the community level, often changing the condition of living for those who are most in need,” Dr. Anthony said. “This is spread across all constituencies – bar none. Secondly, it provides employment in every part of the island, particularly through small contractors.”

Ambassador Chang said his government continues to be pleased that the diplomatic relations that exist between Saint Lucia and Taiwan continues to bear fruit through the many bilateral projects undertaken.

“It is a delight to see more people benefitting as a result of the meaningful cooperation programmes between our two governments,” Chang said during the cheque presentation held in the Office of the Prime Minister. “It is my firm belief that the completion of these four programmes will set another good example to benefit the people and further strengthen our existing cordial relationship.”

After receiving the cheques from Ambassador Chang, Dr. Anthony presented them to Accountant-General, AdriaSonson.