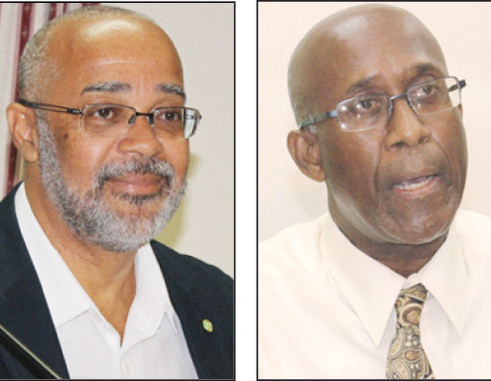 OECS Commission’s Head of International Relations, Anthony Severin, told the media yesterday that the Commission will do all it can to ensure that citizens in the OECS Member States and the wider region are sensitized on the matter.

Speaking at a press conference held at the OECS Commission’s headquarters on Morne Fortune, Severin said the merger and the subsequent quarrel between the two telecommunications companies “have profound implications for the progress of ICT and the economies of our Member States.”

He said citizens and institutions around the region have raised serious concerns which the OECS Commission deems “very real and that there is need for the continued ventilation of these concerns.”

Severin said that while both telecommunications providers continue to trade words over the merger which has sparked public debate, the OECS Commission believes that such debate does not begin to addres the real issues. He said the two companies calling each other out for either alleged malpractice or underhand dealings masks a broader picture that needs to be told.

“We believe that there is need for greater sensitization of our various publics and stakeholders about the real issues at play in order that (1) there can be much greater and more informed public discourse and (2) that public policy when formulated would be more reflective of and responsive to the articulated concerns of our various publics and stakeholders,” Severin said.

Severin said that as a regional body, the OECS Commission intends to raise the level of discourse on the matter in a more pointed matter that redounds to the best interest of the OECS citizenry. He called on the media to be active facilitators of the discourse relating to the issue and to be active contributors in a substantive way. Moreover, he said the OECS Commission will be utilizing social media platforms to get the message out.

During the press conference, a recorded audio message was played for the media in which OECS Commission’s Director General, Dr. Didacus Jules, articulated his organization’s concerns regarding the contentious merger. The recording, said to have been made in late December, spoke to, among other things, the Eastern Caribbean Telecommunications Authority’s (ECTEL) concern about the potential re-emergence of a monopoly in the regional telecommunications sector. He believes the OECS needs to do its part to both communicate its concerns to the parties involved as well as protect citizens from unfair market practices.

“While we may not be in a position to prevent such a merger, we must certainly be ready and able to articulate our own interests and expectations of telecommunications providers and we must be ready to strengthen the regulatory mechanisms to ensure that the sector remains competitive, open and affordable.”

Dr. Jules, who was absent from the press conference, said. “ECTEL and the OECS Commission have been collaborating closely with the Caribbean Telecommunications Union to do this and we recently played a key role in a regional consultation (held in Trinidad) of regulatory bodies at which both Cable& Wireless/ Columbus and Digicel participated.”

Dr. Jules said the issue was both beyond taking sides and beyond the ambits of Cable & Wireless/ Columbus and Digicel. At stake, he said, is the future of broadband, Internet and computer technology as well as the shaping of new competitive options in the region. Beyond any company’s bottom-line, he suggested, are the obvious linkages that consumers and regional development rely heavily on via telecommunications.

“(The issue) is about making these technologies available and affordable to all citizens of the OECS. It is about leveraging the technology to create stronger (and) more agile businesses. It is about transforming living, learning and working in ways that can support our growth and development. That is what many of the more-developed countries have done to the extent that access to the internet has been declared a human right in Finland,” Dr. Jules explained.

Dr. Jules said the recent merger elicits a wake-up call for the region to strengthen its capacity to liberalize the telecommunications sector, insist on standards of service and consumer protection, and protect the jobs of those employed in the sector. To that end, the OECS Commission has made public a document – “Draft Paper on Advancing Telecommunications Policy and Regulation in the OECS: Recommendations Bades on Trends and Development in the Regional Telecommunications Sector” — containing an analysis of the factors involved in the telecommunications sector which, Dr. Jules said, “speaks to the wider issues which must be addressed in relation to all providers.”