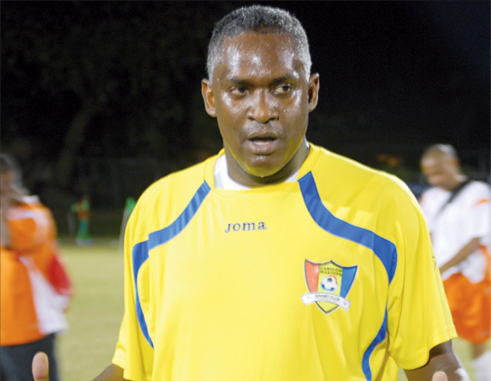 CARICOM Masters of Castries and Soufriere both booked their places into the finals of the 2014 – 2015 Caribbean Alliance Insurances Veterans Football Tournament on Saturday evening following victories in the semi finals played at the Soufriere Mini Stadium.

A small crowd was on hand for the first encounter between Caricom Masters and one of the tournament favourites Behind the College All Stars led by Tennyson Glasgow. The BTC was stunned as a goal in each half of play from the boots of the Alvin Malaykhan secured the Caricom Masters spot in the final with a 2-1 win.

Malaykhan’s goals came in the 37th and 90th minutes, while Marlon Desir’s 79th minute goal from the penalty spot for BTC provided some consolation to the losers.

An elated Malaykhan who spoke to The VOICE following the encounter said; “I think this year Caricom Masters have been focused. We knew playing BTC would have been a tough encounter so we came out focused.

“As a player I remain focused, I was aware that the time was running out so I wanted our team to keep the aggression. Yes, BTC was attacking, we just needed to remain focused and we knew an opportunity would have come at some point”.

Asked how it felt to a have scored twice on the night: Malaykhan said, “It feels great. I got the monkey off my back. I have been playing well, it’s just that I was not getting the opportunities, but today I came focused and relaxed. I just let the ball come to me instead of rushing it and if I got the opportunity I just needed to make the best out of it”.

Who would he rather play in the final, VSADC or Soufriere? Malaykhan replied, “At this point, any team we will welcome it. It’s the first finals we are reaching in four years of the tournament. Yes, you would always want to play the defending champions. We played them in the first round and we defeated 1 – 0. If we get them again we will welcome the opportunity.”

Compared to the first game the crowd had built up significantly for the second match, Soufriere against the defending champions VSADC.

The score line remained 0 – 0 at the half-time whistle, despite numerous attempts to goal by the two teams. In the process the defending champions lost their captain Sean Kerton due to a leg injury midway into the first half.

The resumption saw both teams stepping up the tempo. Several opportunities were afforded in front of goal, but the players failed to convert them. With one minute left of regulation time, it would be Soufriere all the way as former national striker Jerome Serville scored from a few yards out a shot that eluded VSADC custodian Stanley Lesporis and sent supporters into a carnival type celebration.

The finals takes place this Saturday.