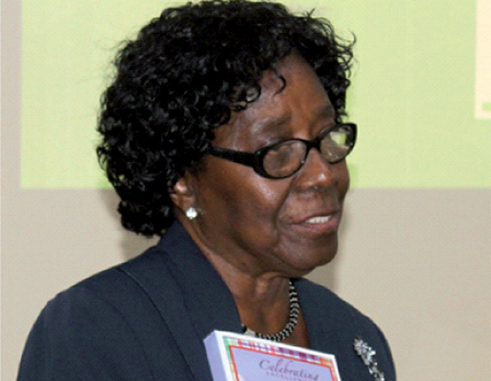 The Head of State made the plea last Thursday as she declared this year’s Hunter J. Francois Library Exhibition officially open at the Sir Arthur Lewis Community College (SALCC) campus. About an hour earlier, Dame Pearlette had laid one of six wreaths near the tomb of Sir Arthur a short distance away where a short ceremony was held.
With this year being the centenary of Sir Arthur’s birth (he would have been 100 years old yesterday), Dame Pearlette said both Sir Arthur’s and Walcott’s milestones should serve as crucial reference points in the island’s long history. “It is good to look back,” she told the audience at the opening of the exhibition.

“(This) is justification enough for us to look back. And that is what many of the activities over the last few days have been doing – looking back,” Dame Pearlette said.

Describing the centenary as a “reflection mode”, Dame Pearlette urged Saint Lucians to “really sit down and reflect on where we’ve come from, where we’re at now and – perhaps most importantly – where we are heading and where we want to go.”

Despite the many challenges the nation continues to face, Dame Pearlette has repeatedly said Saint Lucians need to truly appreciate the honour and achievement that was bestowed on the island via Sir Arthur’s and Walcott’s outstanding feats. If anything, she said, emulating such admirable qualities can augur well for the country’s future.

“(We need) to look and see where we could end up if we don’t take serious stock of where we are today. So I want to be positive and say that the future looks bright if only we choose to be the light bearers both on our own behalf and our country having had such luminaries, light bearers, torch bearers in the persons of Sir Arthur Lewis and Derek Walcott,” Dame Pearlette explained.

Dame Pearlette also urged Saint Lucians to get a copy of the book of lectures delivered over the past years of observing Nobel Laureate Week. The book was published by the Nobel Laureate Week Committee. The new book costs $75 each and can be obtained from Government House.