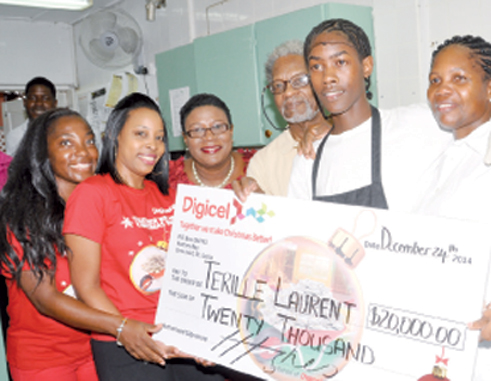 CONTINUING to deliver on its promise of Making Christmas Better for St. Lucians, Digicel once again touched the life of another customer, on Christmas Eve, with a grand prize of $20,000 in cash.

Team Digicel along with camera and video crew, surprised an unsuspecting Terille Laurent on December 24 at his work place in Rodney Bay. Terille, a 19 year old resident of Hill 20 Babonneau, currently employed as a steward at Bay Gardens Hotel was busy clearing up after the breakfast rush, when a chorus of “SURPRISE” brought a halt to his day.

Confused by the commotion, he looked upon the entourage of Digicel employees with a giant $20,000 cheque. Terille, frozen in time for a quick second, could barely articulate his plans for his winnings as he called out for his colleague Theresa to share in his good fortune.

At a loss for words, he managed to comment: “$20,000 this is the perfect gift for my 20th birthday, just in time for my birthday on January 6”. Terille, an Extraordinary Digicel customer since 2009 simply topped up his phone with $15 and that’s all it took to change his life forever.