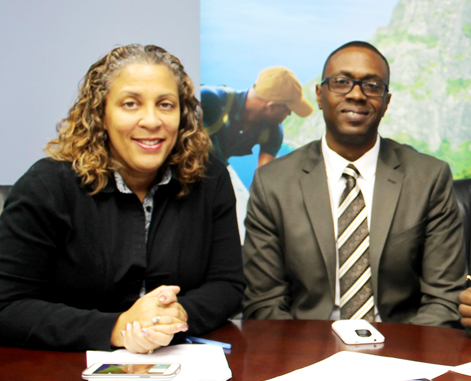 LOCAL tourism officials say Saint Lucia’s impressive performance in the sector during the past year is principally the result of a strategic plan that was mandated by the Saint Lucia Tourist Board (SLTB) in 2012.

According to statistics revealed by the SLTB this week, there were 338, 158 stay-over arrivals to the island last year, up by 6% over the previous year’s total of 31, 862.

At a press conference held at SLTB’s head office Tuesday, the media were told that record performances were also recorded for stay-overs during seven months last year (February, March, April, June, October, November and December), accounting for the highest per-month postings the island has ever had in its history in the tourism industry.

Up until November, the yachting sector recorded a 17.2% increase over 2013’s performance. However, officials are still trying to tally the figures for that sector.

The three major market segments (U.S., U.K. and Canada) posted increases during the past period: the U.S. market by 11%, the U.K. market by 4%, and the Canadian market by 15%. However, the Caribbean market segment continued to pose challenges for the island’s marketing strategies, recording an 8% decline (or 5,000 less arrivals) during the past year. The German and French markets, officials recorded “smaller but significant” numbers, officials said.

Director of Tourism, Louis Lewis, said that since the implementation of the strategic plan, the Board endeavoured to promote Saint Lucia as the ideal tourism destination, effectively making the island accessible from all major markets and ensuring that a strong demand for the destination is sustained. Total airlift, which increased by 5% last year, and a 14% increase in on-island expenditure, were also a key factors.

Lewis described the period under review as “nothing short of a record performance”, adding that the Board and its partners intend to capitalize on and sustain the gains made in the sector in 2014. He said he was particularly pleased that on-island expenditure also increased, saying that much more can be achieved if more focus is placed in other key areas.

“There’s every indication that that growth potential will continue in 2015. Our biggest challenge now remains maintaining the quality of the product so that the marketing method is consistent with what we are delivering as a country. The second initiative that we really need to enhance so that we continue to grow is how we focus on the smaller- to medium-sized properties because that is where the potential exists,” Lewis said.

Another plus in the SLTB’s strategic plan turned out to be having internationally-renowned Saint Lucian chef and Culinary Ambassador, Nina Compton-Miller, representing the island at key marketing events both here and abroad. Media events with Compton-Miller were held in New York and Toronto and the culinary ambassador also participated in the launch of the JetBlue flight from Boston to Saint Lucia late last year.