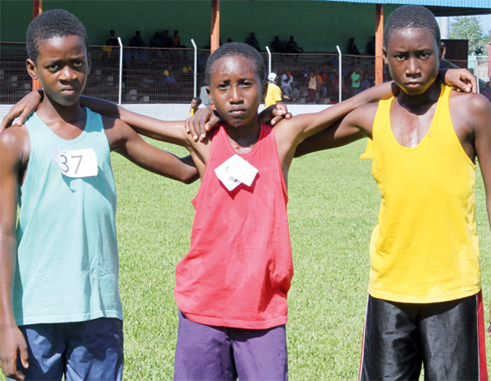 IT was a carnival-type atmosphere with drum beating and flag waving at its very best coming from the students of the R.C. Boys Primary School as the runners made their way to the finish line, but the glory went to Phillip House’s Kelly John who won the 3.5 kilometres race ahead of 159 other participants on Wednesday.

Kelly who spoke to The VOICE following his maiden victory at that level said; “I am happy that I won the race, it was a bit challenging”.

What’s next for the champion runner from Philip House? Kelly now looks forward to representing his house at the annual schools sports meet scheduled for the MPP on February 20, 2015.

Teacher and Chairman of the R.C. Boys Primary School Sports Committee Nigel Francis said, “I am pleased with the outcome of the event overall; this year we ensured we put a number of things in place and made it exciting and not just a road race for the boys. We wanted to ensure we have music in the background as the runners mad their way inside the MPP. We also ensured the awards were in place”.

“The boys have been preparing for the last eight weeks; we have been bringing them out both on the road and the field so they can work on their endurance as well as their physical and running abilities. Everybody was enthusiastic about the whole preparation. We also had our own predictions as to who would win this time around, but Kelly from Phillip House surprised us all.

He continued, “We had a slight glitch at the start with one boy falling down and unable to continue the event, but apart from that I am pleased with the outcome. We are now moving on with a hype for our annual sports meet scheduled for February 2015”.

The final points table based on the number of finishers and placings for the four houses saw Aloysius and Phillip tieing for first places with 63 points, while the second and third place went to Clarke (62) and Lewis (56 points) respectively.