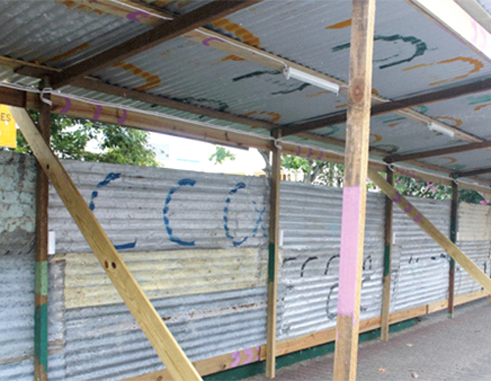 AFTER being hosted at various venues in the island’s north for the past few decades, the traditional New Year’s fun event, Asou Square, has returned to its original venue.

This Thursday and Friday (January 1 and 2), Asou Square will be hosted at the Derek Walcott Square (formerly Columbus Square) where it was last held over three decades ago.

Many Saint Lucians, especially children, look forward to the family fun event which ushers in the new year with food, fun and festivities. Traditionally held on January 1 and 2, the fun event is for many the high point of the Christmas season and has been around for nearly 75 years.

Over the past week or so, the food booths have been going up on the pavements outside the Derek Walcott Square. Just over 60 food booths have been constructed along the Laborie Street, Micoud Street and Bourbon Street section of the Square, while close to 30 sections for vending trays have been marked out on Brazil Street. Five booths will also be set up inside the Square for the sale of toys and where children’s activities, such as bouncing castles, will take centre stage.

Yesterday, Castries City Council (CCC) workers were seen putting finishing touches to some of the food booths. A stage where entertainment will be provided was also being constructed and musical equipment being set up.

Last week, Town Clerk, Reginald St. Juste, said that while the annual activity continues to be a staple on the local cultural calendar, the cost of hosting the event has been growing exponentially. Nevertheless, he said the show must go on.

Since leaving its traditional stomping grounds, Asou Square has been hosted in Sans Souci (along the John Compton Highway), Cul-de-Sac, Beausejour Promenade and Pigeon Point. For many Saint Lucians, this week’s Asou Square will be a nostalgic one, with the event being hosted right back at square one.