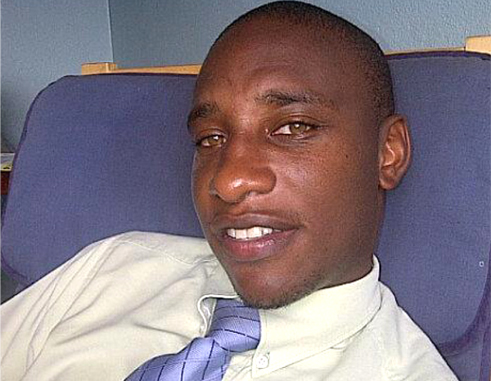 READ ALL ABOUT IT! The VOICE has only gone and flipped the script on one of its own fellow journalists. Miguel Berhane Fevrier is known as one of the faces of Choice News Now and has won many over with his witty charm and those famous brown eyes but today as the face in the crowd, Fevrier speaks of the other side of journalism that not too many know about.

Fevrier grew up at his father’s home in La Toc and is the first born to both his parents but one of nine siblings. He considers himself to be very affable and friendly. He enjoys meeting people and is very dedicated to what he does. However, on the rare occasions when he is not working, Fevrier loves nothing more than to hang out with those closest to him and play basketball, his beloved Xbox games console and lawn tennis.

Although he stands at only 5ft 3 inches tall, Fevrier’s passion and drive for journalism has made him a force to be reckoned with. His fearless attitude and passion for politics has also been very well noticed and as a result, he is either loved or loathed.

Known for being extremely vocal, here is what he had to say with the spotlight on him for a change.

The VOICE: Before entering into the world of journalism, what were your views on the said line of work?

Miguel: I was very critical of local television news particularly. Being an English and literature student, I paid particular attention to enunciation and pronunciation and would never hesitate to go onto Facebook to catch a laugh to the point where I got a personal message from one of them who’s my friend now. Then there was investigative journalism or the lack thereof. I always lamented that reporters never delved as deeply into a particular issue as they should or could but being in the media now, I’ve noted the challenges

Miguel: I can only speak for Television Reporters. The environment is a fast paced one. News is dynamic and for one to expect a proper investigative piece from a reporter, there are lots of things to take into consideration like staffing, you need to have a reporter dedicated to this. Media in Saint Lucia as compared to established overseas media houses highlights a huge disparity. Whereas they may have journalists dedicated to one particular issue, ours have to cover everything and this leaves little room for concentration on one. I’ve been working on two stories for the past three months from which the results may be shocking but I just can’t dedicate the time

The VOICE: So can one safely say that you’ve eaten your own words of criticism?

Miguel: Not all, the enunciation and pronunciation part still peeves me. Hahaha

The VOICE: Tell me about your experiences in the field since you started.

Miguel: I Started in June 2013 and so far, it’s been exhilarating. One of my notable moments was the bus driver who hit me while the camera was rolling. To this day people still ask me about it. This Soufriere bus driver had someone picking up tourists at La Place Carenage and have them come onto his bus. I caught it on camera and while interviewing one of them, he started slapping my shoulder

The VOICE: So far, what has been your worst and best experience?

Miguel: Worst experience — Cherice Benoît’s murder, Hands down! Best…that’s a bit hard but I think it was last Christmas. Timothy’s last show for the year, he had three of us reporters on and hearing the calls and messages of adulation had me blushing there for a bit. There were even calls from St. Vincent and the Grenadines

The VOICE: In a nutshell, tell me what a day in the life of a television reporter is like.

Miguel: Each day is different. For me, it’s get to work, editorial meeting at 8:00 a.m., then we either choose our tasks or they’re assigned but I prefer to roam the streets and find news. I scope out the government buildings and make stories out of the unlikeliest of things so for me, every day there’s a “routine check” at the government buildings so much so that some ministries have offered me office space! Lunch is unheard of. When I get back to the office, it’s write, write, write. Writing is the hardest part though. There are so many facts I want to bring out but you’re limited to a two minute report. I started off 12 hours a day plus weekends. I never stop working and I’m always on Facebook checking out potential stories.

The VOICE: What are the highs and lows of this profession in your opinion?

Miguel: I hate the constant back and forth between the politicians and the media. I think politicians are too sensitive and often times forget the fact that we are doing our jobs. For me…as every other citizen, I have my political preference, but when it comes to my job, I will be a pit bull if I have to. The highs? Meeting people and it never gets old hearing people say I’m doing a good job. I always respond with “I try”. I’ll give you a joke; every day I have to get at least once “you look taller on TV”. My responses are now automatic, even before they finish, “Camera tricks” or “blame the cameraman”.

The VOICE: Is journalism for any and every one?

Miguel: No! You need to be prepared to lose a huge chunk of your personal life and always paying attention to what’s going on. I’ve learnt to have a thick skin particularly from political hacks who don’t like you to report anything negative about their party. If you’re afraid to go to the ghettos, the people there, they’re actually the people who are more appreciative of what you do and they respect you more than politicians

The VOICE: But what about the dangers that come with the territory, don’t you worry about them?

Miguel: I don’t care for dangers. I’m a risk taker, always have been. I haven’t reached the point of threats yet…but I’m prepared. Why do a job halfway?

The VOICE: What advice would you give to anyone trying to join the world of journalism?

Miguel: Be prepared for the time of your life, but it’s not easy. It requires dedication and a keen eye for detail AND you must love what you do…it will pay you back tenfold