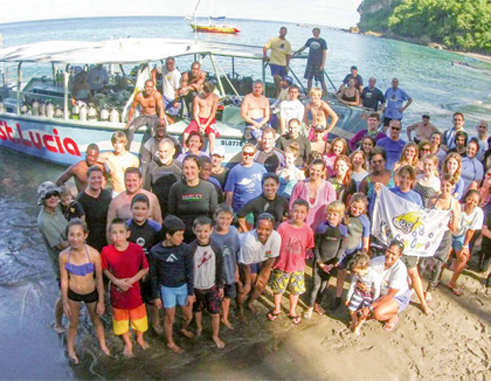 FOR the first time ever, Kids’ Sea Camp chose Scuba St. Lucia and Anse Chastanet as the hosts for their Thanksgiving Trip from November 22 to 29.

Kid’s Sea Camp was founded 15 years ago by group leader Margo Peyton, focusing on the unique concept of bringing a collection of diving families from around the world together at one resort. At Anse Chastanet, 25 children and 39 adults participated in the programme, ranging in ages from 6 to 70.

The youngest children were taught to snorkel by a Scuba St. Lucia instructor while slightly older children joined the SEAL Team and learned to scuba dive in shallow water. A handful of young teenagers spent the week earning their Open Water scuba certifications while teenagers and adults already certified enjoyed diving on our beautiful reefs every morning.

When not diving, the group enjoyed various activities including a tour of the Resort’s organic farm, a sensory chocolate tasting in Anse Chastanet’s Chocolate Laboratory, jungle biking in the Anse Mamin valley, a private sunset cruise and much more. On the Thanksgiving Day, Kids Sea Camp held their annual American Thanksgiving football game, this year in the Soufriere Mini Stadium with many of the resort dive team members joining in.

The week ended with a Caribbean beach party with a slideshow of the week’s events running in the background. Later, the youngest children read poems they wrote describing their Sea Camp experiences and later still some of the more talented adults played the guitar and sang.

In her farewell comments, Peyton, President of Kids’ Sea Camp said: “Kids Seacamp Camp St. Lucia was a huge success and truly honoured our motto ‘To give them memories to last a lifetime’.

“We are looking forward to growing and nurturing young divers from around the world to St. Lucia with Anse Chastanet. Thank you for the best week of the year!”

Based on the success of the programme, Kids’ Sea Camp has already confirmed two additional group visits for 2015 with many of this November’s participants committing to a return visit prior to their departure.

Karolin Troubetzkoy, Executive Director of Anse Chastanet and Scuba St.Lucia, expressed her thanks to the resort and dive teams for having made Kids’ Sea Camp such a success. She said: “Dealing with so many young children and keeping them happy and busy is a challenge in any resort environment but to take them on scuba diving expeditions on top of it all takes great commitment and care which our team delivered at all times. Anse Chastanet traditionally mostly hosts couples and honeymooners, but seeing the children enjoy our resort activities and facilities to such an extent has made it clear to us that we should be paying more attention to the family market, especially during the traditional school vacation summer months.

“Based on the success we have seen with Kids’ Sea Camp, we plan to develop a diving focused kids’ activities summer programme for 2015.”