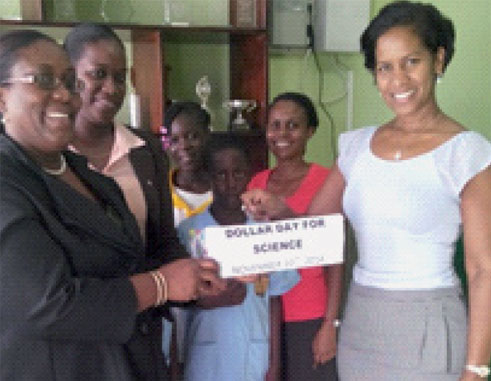 ON November 7, Senator Debra Tobierre showed her support for Science Education in District Six by being the first person to donate $ 1 to the Dollar Day for Science Campaign.

Senator Tobierre threw her support behind the district in their effort to create a fund which will be used to support science activities such as the District Science and Technology Fairs and Science Quizzes. In addition, she further donated $200.00.

Students and staff from every school in the district also made their $1 donations yesterday.

In 2001 UNESCO institutionalized World Science Day of Peace and Development, commonly referred to as World Science Day, celebrated annually on November 10. The objectives of this observance encompass fostering an understanding and appreciation for the importance of science in society and building awareness for the challenges faced by science.

This year’s theme is. “Quality Science Education: ensuring a sustainable future for all.” This theme adeptly epitomizes Education District Six and the science rich activities that occur annually. These activities include the district science and technology fairs, primary schools’ science quizzes and the secondary schools’ participation in zonal science quizzes.

Year after year, Vieux-Fort Comprehensive Secondary School Campus B produces the largest number of projects of any school for district and national fairs. Last year’s top national science fair project came out of Blanchard Combined School with it Floating Bridge. The high calibre of scientific work from young budding scientists augurs well for the sustainability of science and is directly indicative of the high value placed on science education within the district.
The biggest challenge the District faces is its inability to consistently and comfortably finance prizes for students who participate in the science fairs and quizzes. It is anticipated that the Dollar Day for Science Campaign will alleviate this challenge.