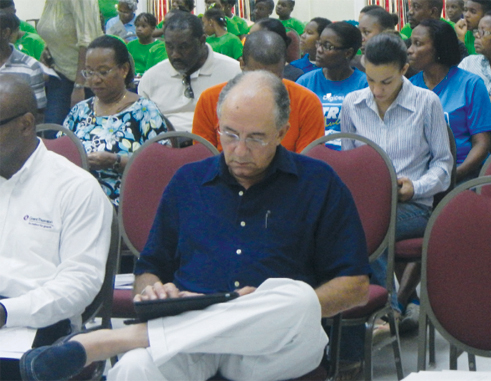 The attendance was a vast improvement over the last AGM which recorded only 63 members and 16 staff. Governor General of Saint Lucia and Patron of the SLNT, DamePearletteLouisy said: “I’m practically pleased with the turnout for the meeting this year after lamenting about the level of attendance last year”.

She indicated that her challenge to the Trust this year is the maintenance of the historical sites, specifically those vested to The Trust, including the rehabilitation of the military cemetery on the Morne Fortune. She went further to thank the secretariat for increasing the number of events for members to participate in.

Subsequently, outgoing Chairperson, Dr.Vasantha Chase recognized from the onset of her report the commitment and dedication of the outgoing Council to the advancement of the Trust. She also acknowledged the efforts of the Saint Lucia Archaeological and Historical Society to improve its representation on Council.

Dr. Chase reported that a number of proposals written by staff have attracted significant funding to carry out various projects such as the Caribbean Fish Sanctuary

Mention was also made of the Walcott Place Project which the Trust has undertaken as per Government’s directive. This project seeks to transform the childhood home of Derek and Roderick Walcott into a museum and a national cultural landmark. The elections of Councillors, which was one of the most anticipated items on the agenda resulted in two new faces joining the fold: namely, Mr. Egbert Stevens and Mr. James Shillington Smith. Dr.Vasantha Chase, Mr.Calixte George Junior, Mrs. Lisa Louis Philip, Ms. Simone Mondesir and Mr.Lyndale James were re-elected to continue their work on the Council. The Trust’s 2014/15 Council will be fully constituted after the Archaeological and Historical Society names their representatives.

Government’s representatives on the Council are Mr. Crispin d’Auvergne and Mr.DunleyAuguste.

Another highlight of the meeting was the display of family heirlooms and treasures donated to the Trust by the family of Mary Ismene and Joseph Johnson Ismene, a prominent couple who lived in Soufriere before their passing. Members were also invited to view a display of the renderings for the proposed Walcott Place Project.