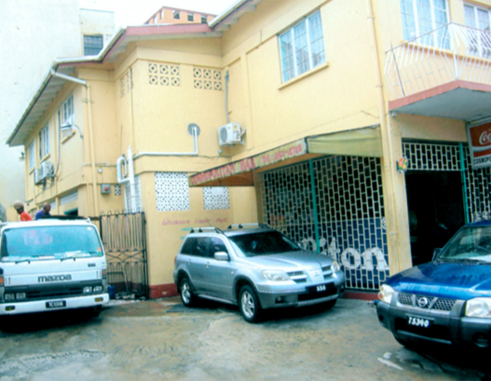 A city businessman is appealing to the Police Force for some consideration after his vehicle was ticketed by traffic police this week, for being parked on a sidewalk.

Earl Lewis, Managing Director of Cosmopolitan Bar Ltd., a wholesale drinks supplier on Victoria Street, told THE VOICE that his vehicle was parked on the sidewalk because its normal parking space was being used temporarily by a delivery truck which brought drinks to his establishment.

Lewis said Cosmopolitan Bar has been operating at the site for the last 40 years and in the past he had temporarily parked his vehicle on the sidewalk while deliveries were made without any problems from the police.

Said Lewis: “I have never parked on the sidewalk for any length of time. I do so only to make space for deliveries to be made to my business place. In earlier times I could have parked on the street but this has now been taken over and used as a bus stop. In fact, on many occasions, minibuses have been seen using the sidewalk as well without any cautioning or ticketing by the police.”

Lewis said while he had no objection to being cautioned for using the sidewalk, he felt this was one occasion when policemen ought to be considerate and be flexible in enforcing this law.

He said: “I was not blocking the street. In fact, vehicles were freely moving along the street while I was parked.”

Lewis said what concerned him even more was the behaviour of the traffic policeman who came on the scene. “He was in no mood to listen to me. In fact he even threatened to tow away my vehicle if I didn’t move.”

The businessman added that while he was exchanging words with the traffic policemen, no less than five other police officers arrived on the scene.

“Considering this was a minor traffic matter, not a crime of any kind, it amazed me that as many as five policemen could have found themselves on the scene”, Lewis added.

According to him, the business, like others on the island, has been struggling to survive in recent times because of the economic situation in the country. Added Lewis: “With the Christmas season approaching and with it the prospect of an increase in business, is the Traffic Department telling me that customers who use the sidewalk to collect their drinks will be ticketed?

Lewis made the point that scores of businesses all over the city have been given permanent “loading zones” in front of their premises to receive and offload their goods, yet the police were denying him temporary use of a sidewalk so that he could carry out the same chore.

Lewis said seven years ago, he wrote to the Chief Transport Officer in the Ministry of Communications, Works and transport to visit the area and help devise an amicable solution to this parking problem which has been plaguing his business for years.”

Lewis said he was prepared to meet with officers of the Police Force to discuss the matter in the hope of finding a permanent solution.