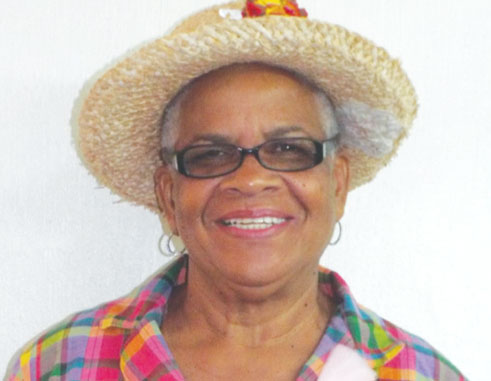 ANDREA BOURNE, in my opinion, is one of the few true pillars of society today, she is widely remembered as the long standing teacher of the Anglican Primary School for 43 years, 16 of which were served as principal and has helped hundreds of youngsters to lead positive lives with her words and methods of inspiration, even to this day after retiring from the teaching service eight years ago.

The former principal is ever so classy yet extremely humble, approachable, kind hearted and jovial but there is even more to her that just adds to her long list of positives.

Bourne and her passionate sense of national pride is one of the founders of the Folk Research Centre (FRC) which is a facility dedicated to preserving all St. Lucia’s history.

With the rapid rise of technology, it is safe to say that such an initiative is an absolute necessity so that our history can never be lost or forgotten.

With that said, all has not been smooth and the FRC has had to face many a challenge just to stay afloat.

Today’s face in the crowd is going to tell us just how they managed with this uphill climb and with National Day quickly approaching, she will tell us what it means to her to keep the essence of our island alive and strong.

The VOICE: What inspired the idea of the FRC?

Andrea Bourne: The FRC started back in 1973 and it started with a group of ten of us under the direction of Fr. Patrick Anthony as he was then known. Included were some students who had left A-Level and a few other people, we met together and decided that since all of us had an interest in culture, we began going to some remote communities like Bouton, meeting with the people, recording them and such. We had a group called “Study and Action” and from this the FRC was born.

The VOICE: How important is it to you to keep St. Lucian history alive?

Andrea Bourne: Oh very, very important…extremely important. I always lament the fact that there is not much, although we have a lot of history, a lot of it I guess is not in documented or book form. The children who are coming up now, they need to know about our history, where we came from and our fore parents so that we can get an appreciation of our culture.

The VOICE: What are some of the real gems that can be found housed at the FRC?

Andrea Bourne: We have a lot of information which is now being digitalised but we have a lot on the ordinary tapes and lots of St. Lucians for example Sessenne Descartes, Harry Simmons, a lady called Eliza Maxwell “Liza” used to be a cultural activist and head of the Goodlands La Rose group, Joyce Auguste, Sir Dunstan St. Omer, Roderick and Hon Derek Walcott. There’s a wealth of information at the FRC.

The VOICE: What are some of the challenges that you and the other founders faced to keep the FRC up and running?

Andrea Bourne: The main thing is finance. We do get a government subvention but recently because of the economic downturn, that has gone down quite a lot. For example, the present location of the FRC is at Morne Pleasant. We would really like to transform this place, because it’s about the only green space within the city limits but the sum to acquire it is exorbitant. In fact we struggle to pay our monthly loans. This is our main problem…finance. Because we have a small staff and of course we have to pay them and that sort of thing.

The VOICE: Do you think that society today appreciates or even recognises the works of the FRC?

Andrea Bourne: Yes and no. Maybe FRC needs to start at the schools. We had a cultural kit, as a matter of fact, distributed to the schools. The schools need to do a lot more to let the children know more of our culture.

The VOICE: What more do you think can be done to promote and at the same time preserve all that is St. Lucian?

Andrea Bourne: We would need to do a lot more PR to inform people of what FRC is and to programmes but because of the financial constraints, we’re not able to do that. If we had that backing, the financial aspect of it, I think we could do a lot more. For example, we have a programme which is ongoing now teaching people how to speak and write creole and although we advertise it, not many people especially St. Lucians make use of that opportunity. And if we were to be for example able to advertise programmes on radio and television (and these cost a lot) then we could sell ourselves some more because our people are by and large are not a reading public. I think people like to see things and get the visual side of it but you know how expensive television is It’s a real challenge but we are here still and the few of us are still keeping the flame burning.